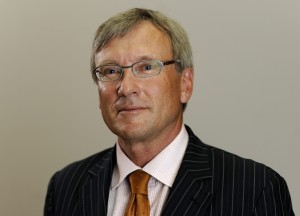 In a letter to the managing editors of the ‘Monitor’ daily, Petya Baharova and Todor Varchev, published on
the embassy website, the German Ambassador in Sofia, Matthias
Hoepfner, expressed surprise and concern because of the cuts
made in an interview of his published in the newpaper on October
23.
According to the Ambassador, what was cut out was his
‘unequivocal criticism of the problematic structures in the
Bulgarian media landscape.’

Hoepfner says he was left with the impression that some of the
thoughts he had shared were puposefully removed to avoid a
critical clash with the subject of media freedom in Bulgaria.
According to him, the interview gives readers a warped idea of
his actual opinion of the political situation in the country.

The parts which were removed include one in which he says that
the concentration of ownership of media companies into the hands
of several persons only is very problematic. He also expressed
concern about the transparency of media ownership,
autocensorship of journalists, covert advertisement and paid
articles.

Showing understanding that some of the questions and answers in
the interview had to be removed due to limited space. Hoepfner
underscores that it was not published in the form agreed and its
meaning is distorted.

‘As a citizen of the European Union and thereby a member of a
community of values which adamantly supports the freedom of
media, I cannot tolerate attempts to suppress criticism,’
Hopefner writes. He also quoted George Orwell: ‘Freedom is the
right to tell people what they do not want to hear.’

‘Monitor’ is part of New Bulgarian Media Group owned by Irena
Krusteva, BTA recalls. She and her son, Delyan Peevski, VEO of
the group, are frequently accused of monopolising the media
market and far from transparent financing./PK/BR

The Vienna-based South East Europe Media Organisation (SEEMO), an affiliate of the International Press Institute (IPI), calls on the Bulgarian authorities to investigate  threatening messages received by Spas Spasov, a Varna-based correspondent of the national Bulgarian dailies Capital and Dnevnik.

On 31 July, 2012, Spas Spasov received a parcel by post containing a dedicated copy of an ancient Chinese book, The Art of War. The signed dedication read: “If you cannot make friends or win them, it is better to leave them alone”. In post scriptum, the note added: “The world is small and it cannot be governed from Singapore.”

The first part of the dedication referred, according to Spasov, to his investigation related to a construction project, while the second related to the newspapers’ publishers. The implication, he believes, is clear: Stop investigating.

Spasov told SEEMO that one day before the book arrived by post, his wife received a visitor:  a representative from a local company connected to the construction projects investigated by Spasov came to her office and requested her home address. Indirectly and directly, the owners of several companies involved in the construction project threatened both Spasov and his family.

“I call on the Bulgarian authorities to take these threats seriously and investigate their origin. Journalists have to be protected and work in a secure environment,” SEEMO Secretary General Oliver Vujovic said. “In a democracy, critical writing has to be accepted and journalists and their families cannot be threatened.”