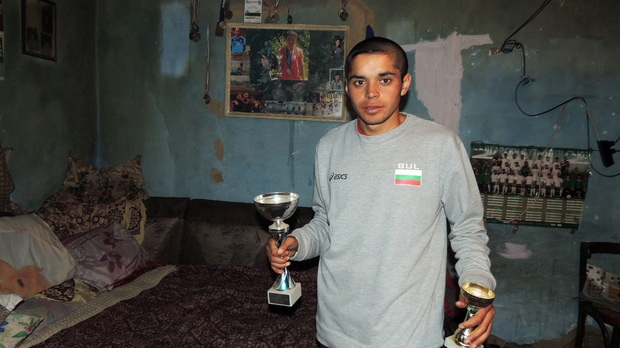 The story of a marathon runner from a Roma neighborhood, for whom hunger is heavier than Django’s chains

His lips are cracked from the lack of vitamins. And when once, before a competition, they took him for a medical check up, the doctor was speechless. His hemoglobin levels were barely above the critical minimum.

„In sports we need a lot of money, but we don’t have it”,

‘s coach Nikolai Yankov explains hastily. “After a run, he needs to have at least one chicken steak. But when he gets home he eats bread and cheese, if they have cheese at all”.

After one of the laps on the running track at the Dobrich sports hall “Dobrotica” the chronometer has just measured 2 min 59 sec. “Wow, that was really cool”, shouts Yankov and points at the dial. “If you manage to get to 2 min 18 secs you’ll be able to compete in any competition in Europe!”

Later, while we talk, Dancho looks at his feet and nervously pulls the laces of his training shoes. He is sitting on the edge of the bench, as if he is considering getting up any minute.

Who is Dancho, you ask?

Yordan Petrov is a national competitor in athletics. He trains in the “Dobrich 99” sports club. In May he will graduate from the sport school “Georgi Stoikov Rakovski”. Just last year he won 10 medals and two first places in competitions in Bulgaria and tournaments abroad. That makes him the third most successful athlete in Dobrich for 2012 and he has no competition in his school. At the national marathon in Sofia last year he won a bronze medal. Before that he has competed in the World Half Marathon Championship in Kavarna.

„I’ve been coaching Dancho for almost two and a half years”, says Nikolai Yankov. “His shyness and modesty are matched only by his talent and resilience. His favorite discipline is Steeplechase (3000 meters obstacle race), but I’m guiding him towards marathon running. It is there that he can develop and grow. If he trains as he does now, I’m absolutely sure he will qualify for the Olympics in Rio in 2016. But I’m afraid they might try and steal him from me. If they manage to tempt him with the short runs, they will destroy him!”

Yankov says he has never heard the boy complain. “I saw that he was thin back when we started training”, he explains, “but it was months before I realized he was starving. Since then I’ve been taking care of him like a father. He should have help”.

“And Then We Went To The Mall…”

On 20 January this year in Zheleznica, a village near Sofia, about 130 runners gathered to participate in a mountain race for Dancho’s benefit. “Just before the end I got lost on the track, because I have no experience”, he admits and looks down again. Only the best orientation athletes finish before him – the European vice-champion Kiril Nikolov and Petar Popunkiov. The sum they gathered was 977 leva (about 500 EUR).

Dancho interrupts this story urgently, to tell another one. “Then we went to the mall, what was the name… I’ve never been there before. We went with Niki Mihailov’s secretary (Nikilai Mihailov is the national football team’s goalkeeper). He bought me all the things for my prom – black suit, white shirt, shoes, everything… I must thank him!”

Up until last year the boy received a monthly stipend of 300 leva (154 EUR) from Mihailov.

The last he could save was 80 leva from his seventh place at the New Year’s cross in Pravec. For his third place as the best athlete in Dobrich’s rankings he received 450 leva (230 EUR). And that’s it.

This is where the dark story begins.

When he explains that he started school at 12 years of age, Dancho’s smile is almost guilty. He runs his fingers over his hair, cut very short and is offended by the question about how he managed. “What do you mean how! I managed. I’ve never let myself go! I was only ashamed, because everyone in my class were still babies… But it was what it was.”

A woman from the Roma neighborhood in Dobrich’s district “Izgrev” sent him to school. “She’s my aunt* Emilia”, says Dancho. Then he explains she is not really his aunt.

„She’s from the others, a Muslim, but we are Bulgarian gypsies and we’re Christian”, he explains. “We didn’t have any money and she gave us work. We’re seven brothers and six sisters. We worked, my mother and I, and the rest of the children who could, we dug her melon field and sold the melons in the summer in Sofia. She paid us and bought us three loafs and a salami. She taught me to work and then enrolled me in school.”

At first Dancho started training to play professional football. He was the fastest in the team. “I played ball, but my strength was in running”, he says and doesn’t even thing about the date. “On 23 March 2009 I went to train in the sports hall. I ran 6km for 4 minutes each”.

The first long distance he ever ran were the 16 kilometers between Dimitrovgrad and Haskovo. “This was the track”, explains Nikolai Yankov. “Dancho had a sort of anxiety about long distances. When he got to the finish he was a changed man. He had gained courage, he realized that he can do it. Right after that he became third in the Malko Tarnovo’s 8 km race in a forest. I couldn’t believe how fast he got into it!”.

Yanov recounts how Dancho used to come to his morning exercises hungry. “I only saw him running. But when I realized what was going on, I asked one of our guys who has a bakery close by – bate Liubo – to give him something for breakfast. This is how the legend started that Dancho runs on one cheese pastry a day. In fact it was the lunch at the sports school which saved him. Otherwise, no way. Sometimes I give him some money to buy hotdogs. This is how our country is”, says the coach.

Before every competition Dancho receives a care package from bate Liubo’s bakery. Muffins and something else for the road. But they never lasted as intended.

“We spread them out, so he can eat one every day, but instead he shares them with the others”, Yankov almost shouts. “I can’t stop him, every time it’s the same thing. Several children travel together in the same train compartment and when he takes out his package to eat, he first offers some to the others. He feels uncomfortable to eat alone, he says. What am I to say to that?”

For the afternoon training in “Dobrotica” sports hall Dancho hastily but carefully takes off his brand new pair of yellow running shoes, with which he came. He catches with the corner of his eyes the envious looks he gets from the other boys that are around and quickly explains:

“They are from Niki, for snow, for the outside. But these are lighter”, he says and puts on his other, worn out yet also yellow running shoes.

The hall’s track is standard – 200 meters. Each training includes eight laps of 1000 meters. After each two fast ones – two slower ones, so he can recover.

“Just look at him, he has style and everything… It’s beautiful!”, Nikolai Yankov exclaims joyfully. “However for this type of exercise you need vitamins, minerals, and I can’t give them to him”.

He explains that one training camp at the base of the National Sports Academy in Belmeken costs 1000 leva (510 EUR). “Just the food and the expenses are 50 leva (about 25 EUR) per day. For twenty days, cause there’s no point in less than that – you do the math! Good thing we have Diakov, the headmaster at the sports school. Recently he took him on a training camp with the footballers in “Sportpalace”, near Varna. After that we went on another one with the athletes in “Kamchia”. I’m hoping this will be enough to get him a bit more on track. This is what we can do now to go forward.

But forward goes down a long and muddy street.

The Movie
In the twilight you can see people who are coming home to the gypsy ghetto in Dobrich, they turn invisible. Almost at its end, one of its little allies turns into a steep slope down. At the bottom the darkness is even thinker.

“This is where I live”, Dancho points, but you can barely see anything ahead.

The national competitor in athletics shares a single room with his younger brother and his stepfather. It’s the only one that has survived while everything else around it has fallen to ruin. He shares with them something else – his dead mother’s pension and the child allowance.

“I had no idea he lived in such poverty” his coach whispers. “There is no water inside, no canalization – not-a-thing! Five months they were without electricity because they owed the electric company 700 leva (about 360 EUR). There were some good people who changed their old windows. Not that you can tell the difference much, but still…”

Inside it is warm and depressing. The big flames from the firewood lick the broken down cooking stove in the middle of the room, and from it comes the smell of burned fat. They are frying potatoes for dinner.

“Look, this is my mother”, Dancho points at a frame, which holds several pictures. She passed away in February last year. She had bleeding of the brain, “she was sick and that’s why she died”, he explains.

In another frame he keeps the pictures from his competitions. Near it, hanging on some nails, are his medals. But since we were talking about his prom I ask him about his suit.

„Oh, it’s with my aunt Emilia”, he says and gives me a bewildered look, as if I should have thought of it myself “How can I keep it here, it will get dirty!”

Before the prom he has his final exams. “I have a few 4’s*** in Bulgarian, but I’ll fix that”, he says. “I’ve decided to take an exam in Russian and in Philosophy. My strength is Philosophy – there I have only 6’s. In Russian I have one 6 and one 5”.

Holding two of his trophies, the marathon runner smiles for a photo. Behind him the flash rummages in the corners of the room and makes the poverty even more insulting.

After the charity run near Zheleznica they took Dancho to the movies. For the first time at the age of 19. There he saw „Django Unchained“.

* Aunt is sometimes used to convey close relationship with a woman, older than the speaker, even when there is no family connection.

** Bate is a used in Bulgarian to address respectfully an older brother and men/boys slightly older than the speaker, regardless of whether they are relatives.