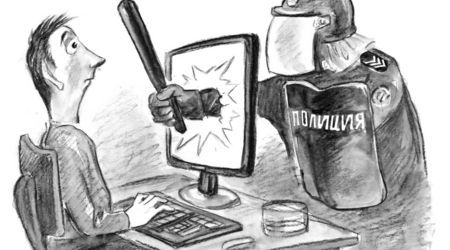 The trouble with Bulgarian “revolutions” is that they never go all the way to the end, that they remain incomplete. That is why they copy themselves permanently as if using copying paper – conservatively, doggedly, getting paler and paler and becoming illegible. And they always start over again. With the passage of time though, another thing becomes clear. The abyss between the analogue country and the free “digitalization” of young Bulgarians will more and more make the latter face the impossibility of overcoming their heavy heritage – to finish what their parents failed to complete. The problem is serious as, in this way, the state and its citizens will go on communicating without success. Or even will not communicate at all, sinking into permanent suspicion and distrust. Just like total strangers. In this sense the romantic energy of students’ protest for “a change of the system” seems to be logically generated exactly by the feeling that “you cannot talk to these people/ the state/ anymore.

AN ALGORYTHM OF DESTRUCTION

The way in which the state, represented by the Ministry of the Interior, used the Internet to disperse the protesters in front of the People’s Assembly / Parliament, demonstrated three things:

First: The state treats the Internet as a means of tracking down ideas and intentions.

Second: To the state, the Internet is a hostile environment, which has to be kept at bay.

Third: To the state, the Internet has already become a vehicle for a cunning replacement of one reality with a different one. There are no serious arguments against the suspicion that the trick with the virtual threat of bombs exploding in front of the People’s assembly is in fact a conspiracy. Otherwise, the algorithm of destruction which followed orders to suspend the protest would not have been so arrogant. The analogue state used its loudspeakers as an alibi for the fact that it did not succeed in infomring the protesters in time that they had to leave. That is why it in no way attempted to use as a back connection the channel through which the bomb threat had been conveyed. And instead of reaching the ones it had to talk to at this moment, it preferred to chase them around in the bushes of Boris’s Garden. An episode from TV coverage explains to some degree the internal motivation of such behavior: A policeman orders a young man who is frozen with terror: “Lift your hat so that I can see your little eyes!” Although unwilling, the boy obeys. A blow with a baton follows, and another policeman asks, “Why the hell are you lifting your hat?”.

The state described in this way cannot be impressed with “peaceful forms of protest”. It does not presuppose their existence. But there is another aspect, which is even worse.  By relying on a voice strengthened by loudspeakers, the state remains devoid of any other means of response to dissatisfaction apart from stones thrown at its institutions. It is exactly this type of conduct that will introduce copying paper after copying paper underneath the deplorable episodes of Bulgarian democracy.

A CONVESATION WITH “ZVEZDICHKATA” / “THE LITTLE STAR”/

During the first 24 hours of its existence, the site of the virtual protest, feelingfriendly.com, had registered 120 000 unique visits. In the peak hours of the protest on January 13 and 14 the number of users who declared solidarity with the young people gathered in front of Parliament  was over 6,000, i.e., 3 times more than those physically present there. None of these figures were mentioned in the Government’s official commentaries though. These commentaries dwelt upon its motives in using “measured force” against the dissatisfaction of a part of its citizens.

Even the Prime Minister ignored the Net as a system of expressing sympathies or antipathies. But just several months earlier, enhancing his image, he flirted a bit online with “Zvezdichkata”  –  the 22 year old “Miss Buzludja 2008 Irina Yordanova , who had invited him to call her on a billboard under the windows of the Council of Ministers. In that case, the site of young socialists, red-bg.com, was used as a platform of communication. But this time around, the Premier stayed off-line, ignoring the protesting students’ persistent invitations. That was in no case a sign of insecurity. It is simple! The moment the state decides to use its repressive potential, it has no need of the Net’s liberal rules. Staying off, it fakes “non intervention in the internal affairs of the protesters”, but in reality it encapsulates their dissatisfaction in a virtual space. There though, the protests and the wish to change the Government or the system could successfully develop only and singularly in an option of Second Life.

Alas, it should be clear to students and fans of online revolutions that they live in a “first” life. Here, ugly avatars do not scare anyone. It is such a pity, but the half-drunk ultras in half-boots and scarves in the colors of the national flag are much scarier, while the emoticons with wrathful little faces and animations of bombs with smoking fuses are exactly as touching as the picture of cake one would receive by some friend on Facebook. In real life, attempts to change the system by out-of-system means generate tender patronizing at best, while spending days browsing feelfriendly.com or some of the protest forums degenerates into a pardon for a clear conscience for lazy citizens. The response of the gendarmerie and the police was beyond proportion, but a total and strategic success. Here is a comparison – the Sofia Police reported 150 arrested of 2,000 protesters over three hours. At the same time in Riga, out of 20,000 protesters, just 126 were arrested. There the turmoil lasted for several days and there was serious material damage.

In this way, healing its complexes of 1997, today’s drivers in the state machines seat violated the border and forgot the rule  that beaten citizens never forgive. But they also delivered a lesson – this here is no Second Life.

This text in Bulgarian  – (Dnevnik Daily).