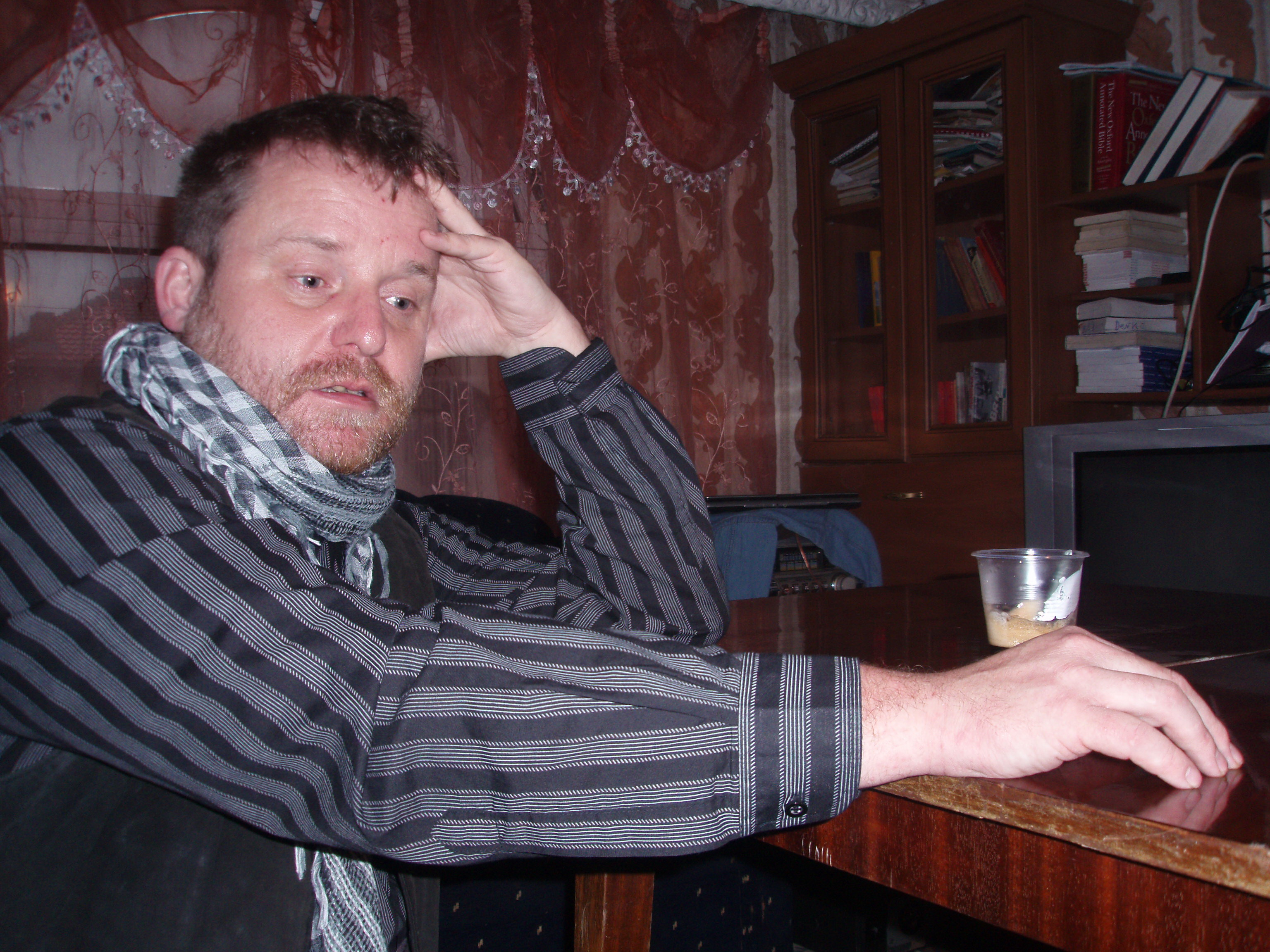 The story of an unusual trip with an electric bus, which changed the life of the Roma in the ghetto at the outskirts of Varna

“Every day I wake up with a worry, as if I would be on board of the sinking ‘Titanic’. There are so many people who are to be saved but there are not enough lifeboats. Who should be left behind and who should be saved?”

With the burden of this insoluble task the German Frank Abbas is trying to sort out the chaos in the Varna-ghetto by making his life a part of it for about eight years now .

He came to Bulgaria in 2004 to work for a trading company. But very quickly his life changed radically – he now lived in a street without name without having a permanent living place together with friends whose language he didn’t speak properly.

“When I came to Varna I deliberately kept my distance to  the well-paid managers of German companies and their way of life”, Frank said. So one day he got on the electric bus No 82 for a trip to that part of the city a tourist would never find his way to.

“At first I couldn’t locate the ghetto in all the dust and dreariness of the concrete buildings”, Frank remembered. “A bit confused I tried to find the right direction and suddenly found myself in the middle of the ghetto. The surroundings weighed me down. When I was a small boy my Grandma often told me about the Warsaw Ghetto and I had to promise her not to be indifferent if I saw something like that. Don’t forget, she told me, history repeats itself because of the people’s passivity!”

Frank couldn’t sleep all night, the next day he looked for an interpreter with whom he again went to the ghetto. Before that he bought a football. “ Football is a team game, and so I tried to get in contact with the people without having to speak their language”, he said. It took me two half-times, until they were convinced that I was neither a social worker nor a policeman or missionary. It was only then that I noticed  the ‘door’ for me being open.”

On the other side

To be closer to the people Frank decided to move into the ghetto and to live there.

“I had to prepare myself for that step and so I asked the the sisters of Mother Theresa’s order in Varna for help”, he said and added, that most of the sisters came from Calcutta. “I learned three basic rules from them: 1) to get vaccinated, 2) to eat and drink everything you are being offered in order to strengthen your immune system, 3) be prepared to get ill for all that, but never take antibiotics.

In January my life started again from the beginning – with the confidence and hope out of my faith.

I told the Roma that I am simply a German needing their help to survive in the ghetto”, Frank remembered. “You can’t  imagine the astonishment when they heard this and the eagerness of them to help me finding firewood, a cupboard, a bed, food, two buckets for drinking and washing water.

For the first time in their life they were on the other side – they could help someone instead of asking someone for help.”

In the beginning Frank lived in the poorest part of the ghetto. In May he moved to a better place to begin the establishment of the  “Paisii Hilendarski” organisation.

This part of the story he starts with a quotation from St. Matthew’s gospel. The verse he put his finger on  was ‘someone who takes in a child takes in me.” “So I set up the first group of seven children”, Frank said. They were between 12 and 14. The ghetto is a jungle where a human being stops to be a human being. Life there is determined by primitive needs and powers,there is no corrective and no standard of comparison what so ever. Although I lived a very primitive life I was different to them, I successfully managed my daily life, and it was that they noticed.   After I had

been waiting for some time I told them if I could manage my daily life they would be able to do that as well.

The boys who Frank had assembled around him are now 20 years old. In the ghetto they are his

voice, his police, advisers but also his critics if he makes mistakes.

One morning it was raining cats and dogs on some old shoes piling in front of Frank’s door, They were just as wet as a street dog lying on the threshold. The boys had gathered, to organize the day’s tasks – Ahmed, Ilia, Pinko, Bacho, Verdi … The room has a low ceiling, it’s dim, dark and depressingly poor. They sit around a stove without a fire in it. They save firewood although it is just one week before Christmas

After one hour Pinko was told to set off with the dark blue dented minibus of the station to collect the children from school. Verdi will buy a Christmas tree and decorate it. Bacho has a meeting with the boys from the ghetto who are 16. He has to get to know everything about them. Ilia will drop in on some families who need help.

Every day one of them is determined to go round from house to house at 5:30 to wake up the children and  take them to the assembly point. He has to get up very early, because the minibus can only transport nine kids but there are more than 60 of them.

In one of the schools Ahmed plays the role of an ‘interpreter’. He stays with the kids in the classroom during the lessons, cares for discipline and helps them. “The Roma have a special group feeling of their own, they don’t understand the communication system of the Bulgarians, this is why both groups feel a bit strange towards each other, therefore it is necessary to have a mediator for them.

In a half dark labyrinth of one of the ghetto houses  steep stairs go up to a former bar room on the first floor where the children are being looked after after school. Here they do their homework and have coaching lessons in maths and Bulgarian  to catch up their deficits in these subjects. Verdi cares for the stove which is made from on old barrel, and there is a parents meeting there as well.

“The aim of all what we do here is that the boys who are between 6 and 7 now will be able in ten years to live together with Bulgarians outside the ghetto without having problems with them.

Every day I pass the prefabricated buildings of the Bulgarians hearing reproaches of them against the Roma. At the same time they have no explanation for not getting organized themselves and keeping the surroundings of their blocks clean. Like the Roma they need to see that only  a small domino has to fall to move the rest of them”, he explained.

By the help of another project  of “Paisii Hilendarski” Roma families can get micro loans to build their houses with them. Afterwards they place their new house at a non-governmental organisation’s

disposal. In this way they can pay back their loan in three years. In one of these buildings a flat for protected living has to be fitted out for 18/19 year old  boys having been dismissed from a social home. “That’s a pilot project which we start with 8 persons. These boys have to learn to manage their life themselves after having left the social home. This project is to last for 3 or 4 years, during this time a psychologist and  an educator  will live together with them in the house. “

Frank plans to register a company for dealing with wood. He intends to train those boys for this job who are interested in this kind of work. The next step is the participation of  young Roma men in qualification programmes organized by the German government about which Frank has already had talks with the German embassy in Sofia. By the help of another partnership with the Kaufland supermarket company young Roma are to be integrated into the training programme of the company.

The flash-light of my camera cast a shadow of mistrust on the boys’ faces. Frank explained to me:

“I have told them how organisations from Germany often send people to east-Europe to be photographed with Roma to use these photos to collect donated money. But this money doesn’t reach the Roma for whom it was  donated. To exclude any doubts, his organisation is only provided with a budget which is necessary for its daily work. According to his own words Frank gets a salary of 700 Leva which he puts back into the budget. “We work together  with the Bulgarian branch of the British foundation Trussel Trust “, Frank explained, “We also have a private sponsor – the German ecumenical order called CHRISTUSTRÄGER.” Although Frank doesn’t do any missionary work, the order finances 90% of the “Paisii Hilendarski” projects. The remaining 10% are financed by two German families who live in Vienna and in Moscow, but who want to remain unknown.

“Money is a great problem for what we are doing”, Frank says. Not a single project has been financed so far by the city of Varnay of Varna has some special methods to pocket money for supposed projects of integrating Roma’s. According to the reports of non-governmental organisations working in this field the corruption swallows up between 20% and 60% of the money  earmarked for the integration projects. In this prize category Varna holds a top position and the name of the people who are traditionally profit from these projects are an open secret in this town.

The project Frank is working on at the moment is to give all Roma families from the ghetto with pre-school children the possibility to prepare their documents for registering their children for the coming school-year and to hand these documents in in time. “Everyone has to understand that Roma want their children to attend a school, but the educational system in Bulgaria has  not the capacity to enrol them all. Some of them are enrolled fictitiously to fill up the school budget which is figured out on the number of pupils enrolled in that school. Without having had  one single lesson these kids go through school from one class into the next higher one. So the teachers get some more money but the future of these children is spoilt”, Frank said.

The volunteers of “Paisii Hilendarski” are planning to install limited stations in the ghetto in coming May to fill in the forms there for the school registration and to help the parents to give the volunteers the power of attorney to represent them with the local authorities..

“Even if it is dangerous for them, the rhinos remain at their places, and under no circumstances they will retreat. I teach the Roma how they have to live”, Frank said, “the system of double standards for the Roma has to be blocked. That is a kind of civil war without stones, Molotov cocktails and any other kind of violence – but I will definitely win it!!!”

The text In German  – here!